A social change movement in New York City – led by parents and their allies in the interests of children, families and communities. 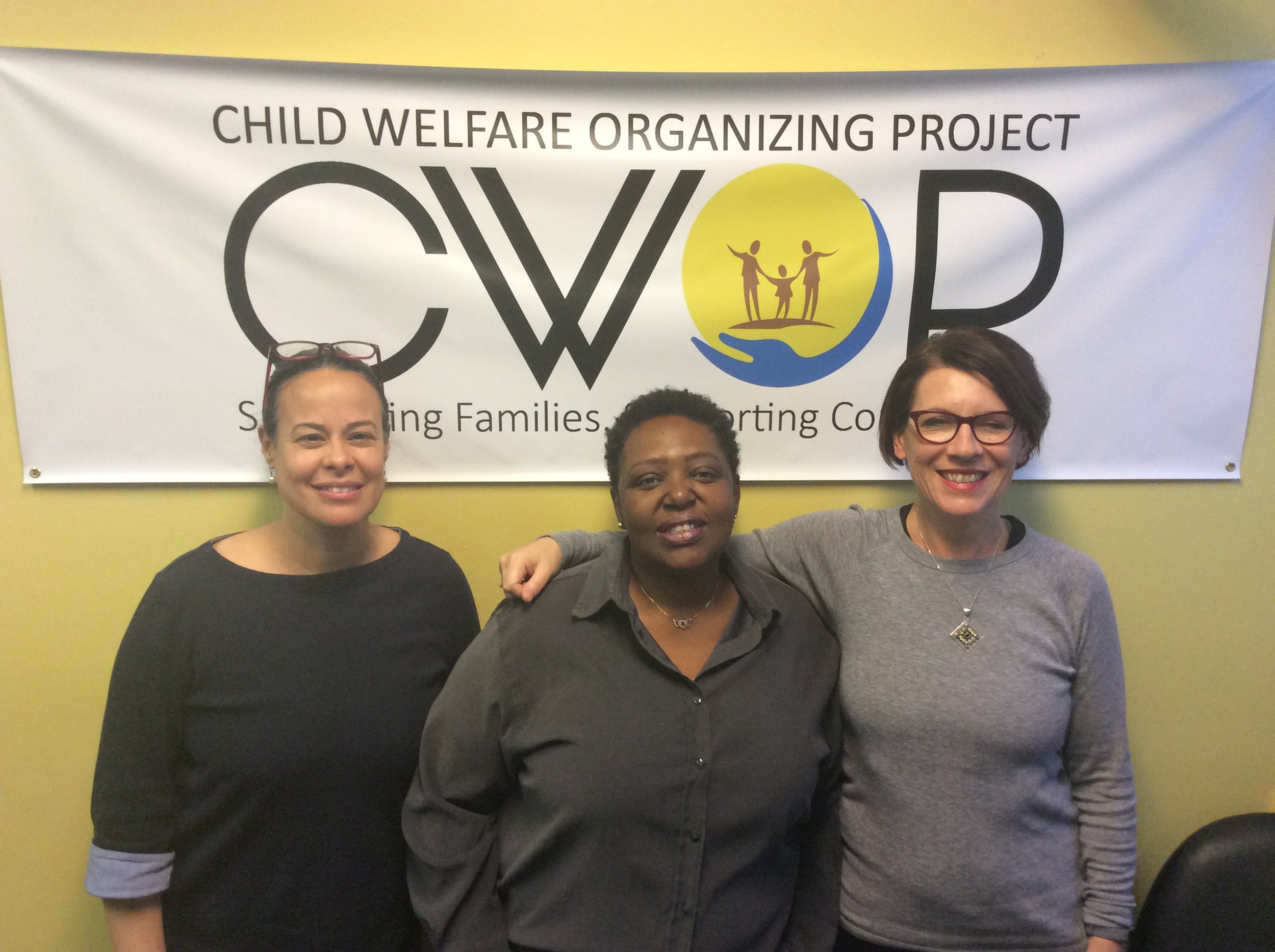 Eva Joyce and me at the Child Welfare Organizing Project (CWOP) in East Harlem. CWOP is a parent led organisation. It has been around for more than 20 years and has been instrumental in bringing about change over time.

Over the past 20 or so years New York City has seen a  dramatic reduction in children in care. A big part of this change has been the work of parent led organisations like CWOP and Rise (see photo below). CWOP runs parent support groups, does direct parent advocacy and support, runs events and training and participates in social change and activism activities to improve policy and change unjust laws. During my visit alone I saw parents working with lawyers, politicians and change makers, developing strategy and making a systemic difference. They also do individual parent advocacy, run groups and more. Find out about CWOP at www.cwop.org 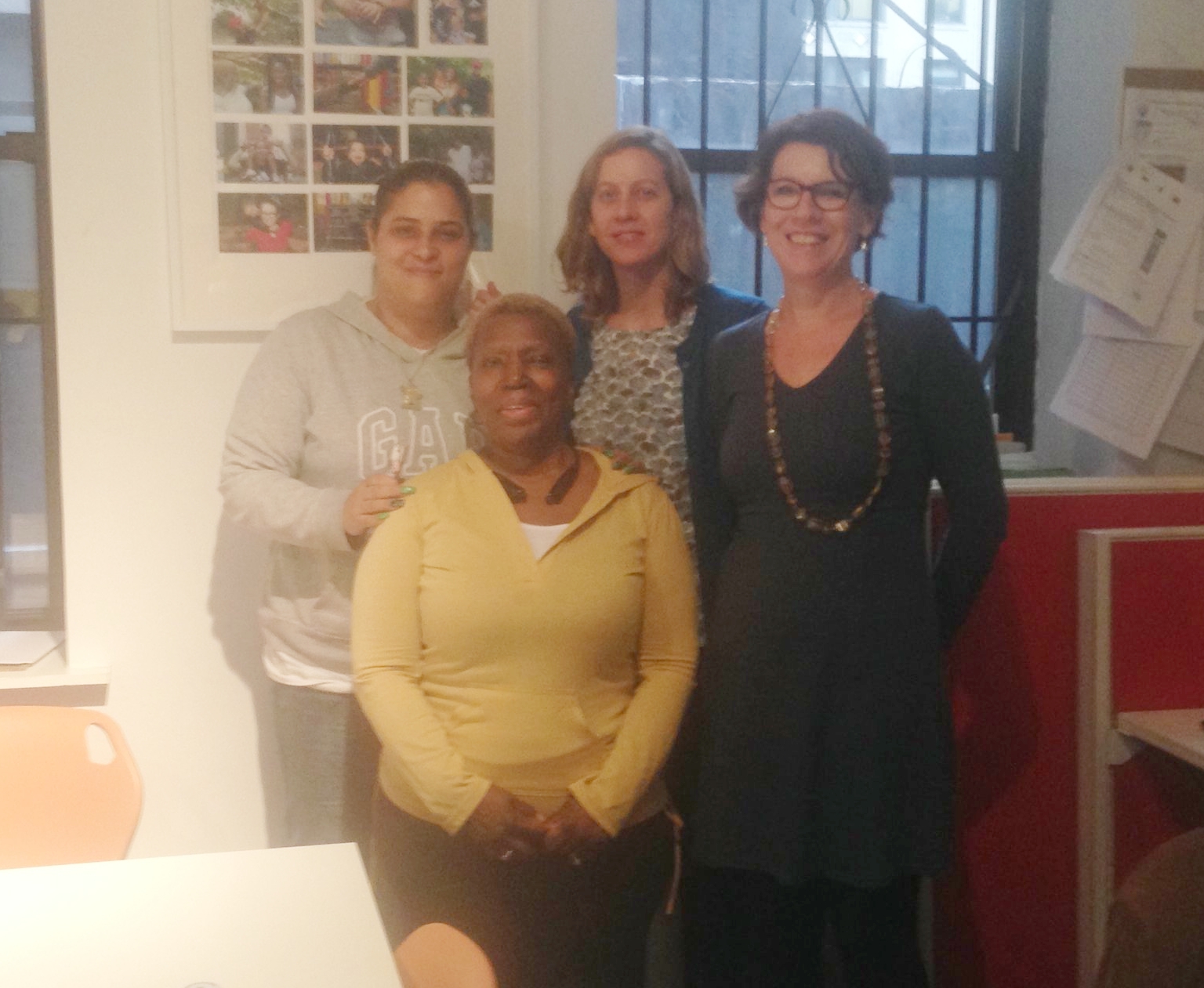 Jeanette, Robbyne, Nora and me at Rise Magazine. This organisation was developed not long after the CWOP and they have a long history of amplifying parent’s stories and voices to bring about change.

Learn more about Rise at www.risemagazine.org/. This amazing organisation has been doing writing and publishing work for many years – documenting the stories of parents and children affected by child welfare in New York City. From successful restorations to disrupted adoptions – stories and voices can help bring about healing and transformative change. I was able to share some of the work of FISH and our wonderful FISH leader Lauren Graham who, as a narrative therapist and story teller, has done similar work in Australia. Rise are helping to prepare curriculum for child welfare workers and undertake other change projects to improve the system. 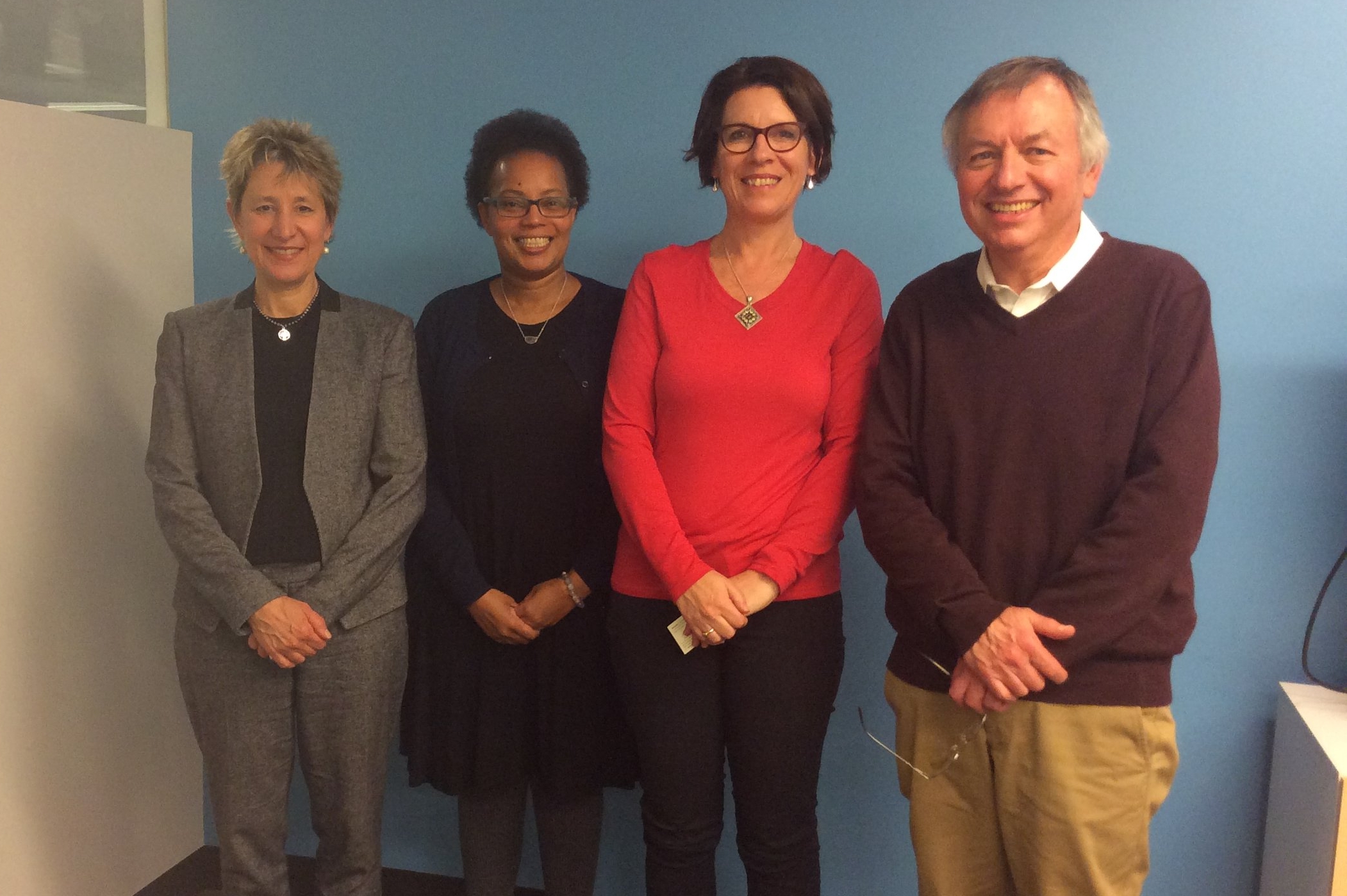 Michelle, Wanjiro, me and Phil – at the Center for Family Representation (CFR) in Manhattan and Queens.

The CFR and other organisations in New York City including the Bronx Defenders Office (see below for more info) are “family defence” organisations. They are multidisciplinary teams made up of lawyers, parent advocates and social workers who all work to support and advocate for parents with children in the child welfare system.  I also met with Professor Martin Guggenheim at New York University who was part of the development of these organisations. Many of these leaders  and workers started their professional lives as children’s lawyers or as social workers in foster care agencies and quickly recognised that supporting children’s rights means their parents should always be well represented and supported. These organisations now attract the best and the brightest social work and law graduates in New York. In Marty’s words “every child has the right for their parents to have the best possible legal representation”. Based on local data the CFR and other family defence practices –  the Bronx Defenders Office and the Brooklyn Defenders Office have contributed to big reductions of children in foster care. The CFR is currently being independently evaluated with results to be published in the near future. I know I’ll be watching that space! 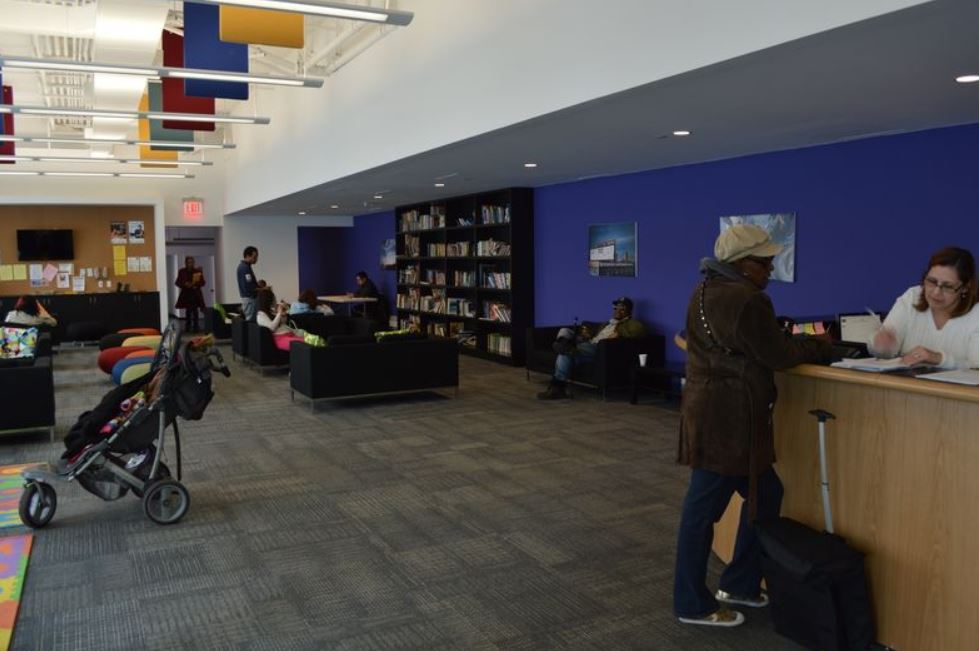 The friendly waiting area at the Bronx Defenders Office.

I had such a great meeting at the Bronx Defenders Office that I forgot to take a photo of Emma, Sarah and Caitlin, the Director, Director of social work and manager of the healthy mothers, healthy babies program respectively. The BDO do similar work to the Center for Family Representation and represent nearly all parents with a child welfare case in the Bronx County, a vibrant community in New York City. Along with their colleague organisations in Manhattan and Brooklyn they are making a difference by making sure parents have a team in their corner and are always supported by an advocate in their dealings with the child welfare system. They are doing particularly important work in the healthy mothers healthy babies program by intervening to prevent devastating and traumatic removals of newborns from parents who have previously or currently have children in care. There are big learnings for us here for Australia. 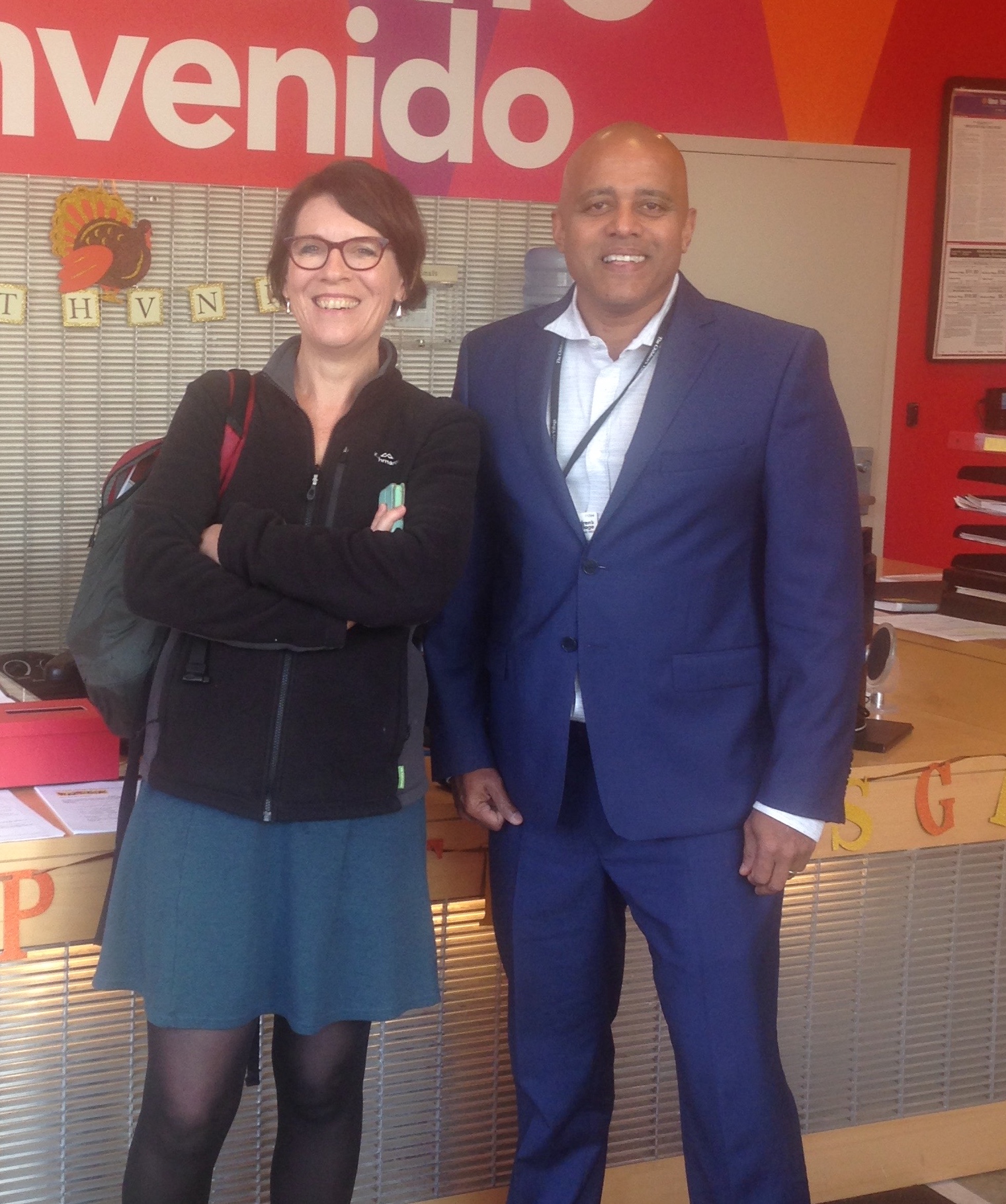 Me with Jeremy Kohomban, CEO of the Children’s Village and co founder and continuing board member of CWOP.

Jeremy is proof that social work and foster care agency  leaders need to be part of a parent led change movement. Along with other allies, Jeremy supported the development of parent leadership from the beginning and is still a board member at CWOP. The Children’s Village employs parent advocates in their foster care and family work. They run a number of evidence based programs such as Multi Systemic Therapy but Jeremy was adamant that these programs do not address the root causes of child removal – poverty, racism and entrenched disadvantage. He showed me through a housing project the Children’s Village has led which takes a community development approach to address structural disadvantage through safe, secure and beautiful housing in Harlem.

There is more to say about New York City as these are not the only places and people I visited but time and space is running out. It really was inspiring and an incredibly important part of the Fellowship.